The 2022 Chemistry Nobel Prize winners are the pioneers of click chemistry and bioorthogonal chemistry . 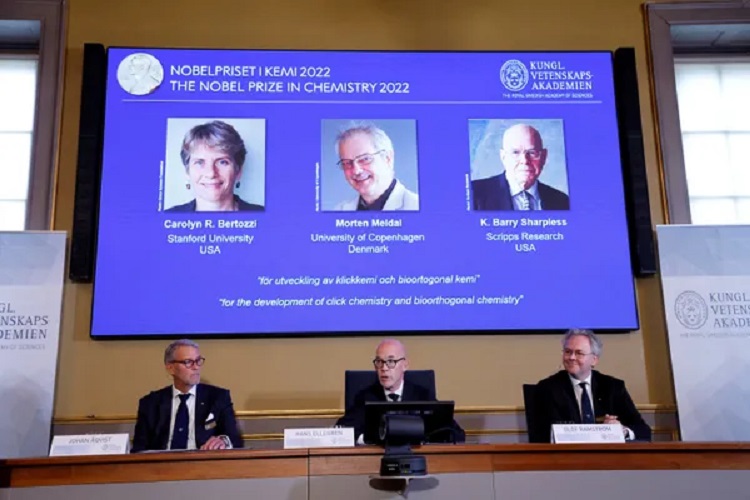 The 2022 Nobel Prize in Chemistry was awarded last week to two California scientists and a scientist from Denmark.

Carolyn R. Bertozzi of Stanford University, K. Barry Sharpless of Scripps Research and Morten Meldal of the University of Copenhagen developed a way of “snapping molecules together” that can be used to explore cells, map DNA and design drugs that target diseases such as cancer and many others more precisely.

The scientists’ independent research resulted in the development of what is known as click chemistry and bio-orthogonal chemistry.

Their works have “led to a revolution in how chemists think about linking molecules together,” said Johan Aqvist, the chair of the Nobel Committee for Chemistry.

Molecules are constantly reacting all around us: in our foods, in our organs, in our phones. These reactions create new molecules, break down old ones, allow energy swaps — they shape the variegated dynamics of the universe. For scientists looking to understand these forces, combining molecules in a controlled way can be difficult, especially in a delicate environment like a living cell, because everything is so closely connected. Often the surrounding molecules are disturbed in the process, changing the very thing a researcher wants to study.

In 2001, Dr. Sharpless and some of his colleagues published a paper introducing something he called click chemistry, a new way of approaching this kind of molecular control when applied to the creation of new drug compounds. 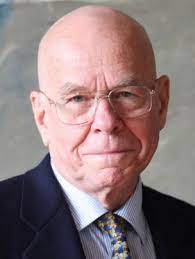 The method would be based around one rule, he wrote: “All searches must be restricted to molecules that are easy to make. Instead of trying to synthesize, or chemically create molecules by forcing a difficult organic bond,” Dr. Sharpless said, “focus instead on bonds that form fast and produce stable byproducts. If done in the right way, the tougher bonds will form automatically, clicking into place. Think of them “as gifts of nature,” Dr. Sharpless wrote.

“What’s unique about click chemistry is that the two reagents, in the presence of hundreds of thousands of different types of molecules, will only seek out each other and only give one product,” said Jiong Yang, a program director at the National Institute of General Medical Science who oversees Dr. Sharpless’s work. “That’s the basis of all this technical development.”

This shift in approach was soon followed by the discovery of a reaction called copper-catalyzed azide-alkyne cycloaddition, which put the theory into practice. Azides and alkynes are two types of molecules. Dr. Meldal and Dr. Sharpless independently found that when they were combined, using copper as a catalyst, the reaction was fast and efficient and the product was stable. 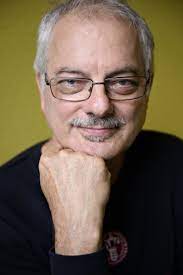 Now known as the “crown jewel of click chemistry,” the discovery was “like opening the floodgates,” said Olof Ramström, a member of the Nobel Committee for Chemistry in a briefing after the laureates were announced. “We were using it everywhere, to build everything.”

What may have been the most pivotal application of click chemistry began to take shape before the term was even coined. In the 1990s, Dr. Bertozzi was studying glycans, carbohydrates that sit on the surfaces of proteins and cells, the functions of which were not wholly understood. While much attention was being paid to genomes and proteins, glycans were relatively overlooked, in part because they were really difficult to track inside living organisms.

Dr. Bertozzi began looking for ways to attach fluorescent molecules to glycans so she could map them as they moved. But the molecules used to track the glycans couldn’t interfere with the rest of the cell’s functioning. So the method had to be, as Dr. Bertozzi put it, bio-orthogonal. It had to stay out of the cell’s way. 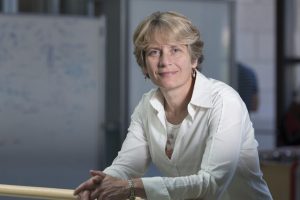 Around the same time that click chemistry emerged, Dr. Bertozzi was able to develop bio-orthogonal tracking methods, and she realized that she could apply the new paradigm to her work, attaching fluorescent alkynes to glycans to be tracked. The reaction, as it stood after Dr. Sharpless’s and Dr. Meldal’s contributions, required a copper catalyst, which would be toxic to living organisms. But Dr. Bertozzi came up with a different way of getting the two molecules to click together, modifying the alkyne’s structure to fill the catalyst’s role.

“This was a known concept,” said Laura Kiessling, a chemist at the Massachusetts Institute of Technology, about Dr. Bertozzi’s insight. “What she did was recognize and apply that concept to a reaction that we could use in biological systems.”

Like many scientists, Dr. Kiessling, a friend and colleague of Dr. Bertozzi, uses bio-orthogonal click chemistry to map the internal structures of organisms, and the movements of their cells. For instance Dr. Kiessling does research on tuberculosis, and said that, with the method, she was able to “visualize classes of carbohydrates that we couldn’t see before.” Other applications include tracking tumors, sequencing DNA and studying viruses. Dr. Kiessling added, “We use this chemistry all the time — as do others.”

“This has really opened up an immense amount of new space for scientists to study how different living processes work and to watch those processes in action, even in real time,” said Dr. Lorsch, whose organization has funded both Dr. Bertozzi’s and Dr. Sharpless’s research. 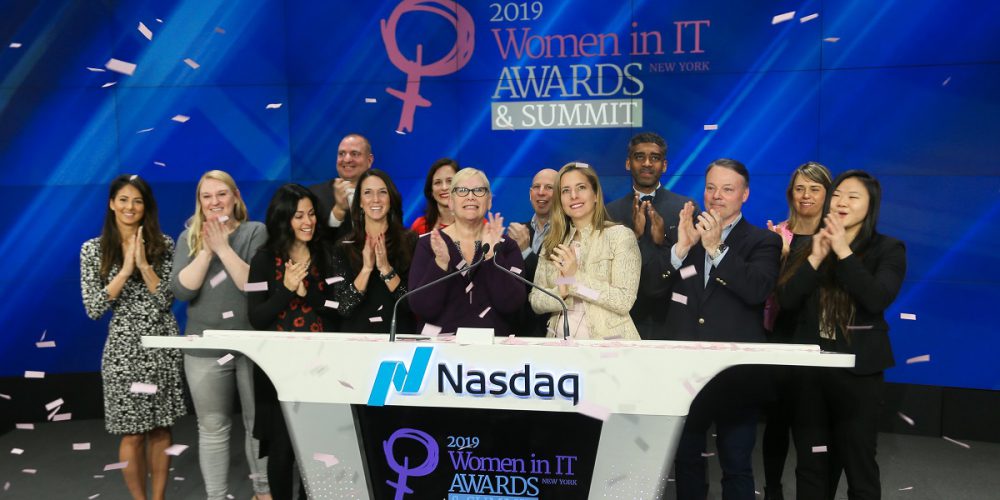 The 2019 Women in IT Awards and Summit in NYC 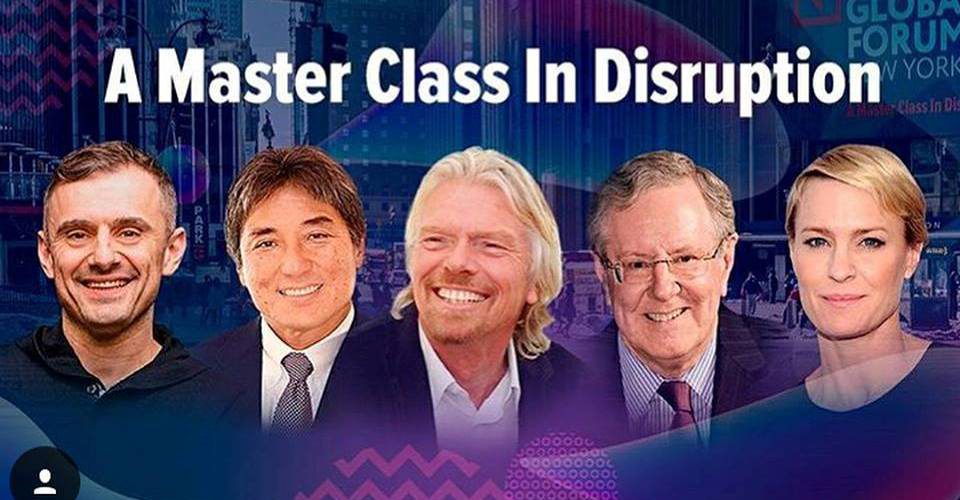 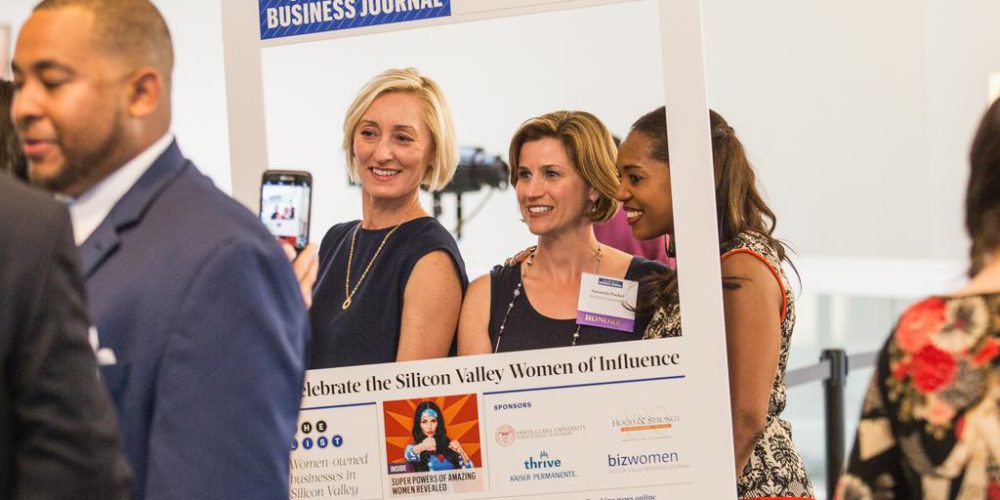