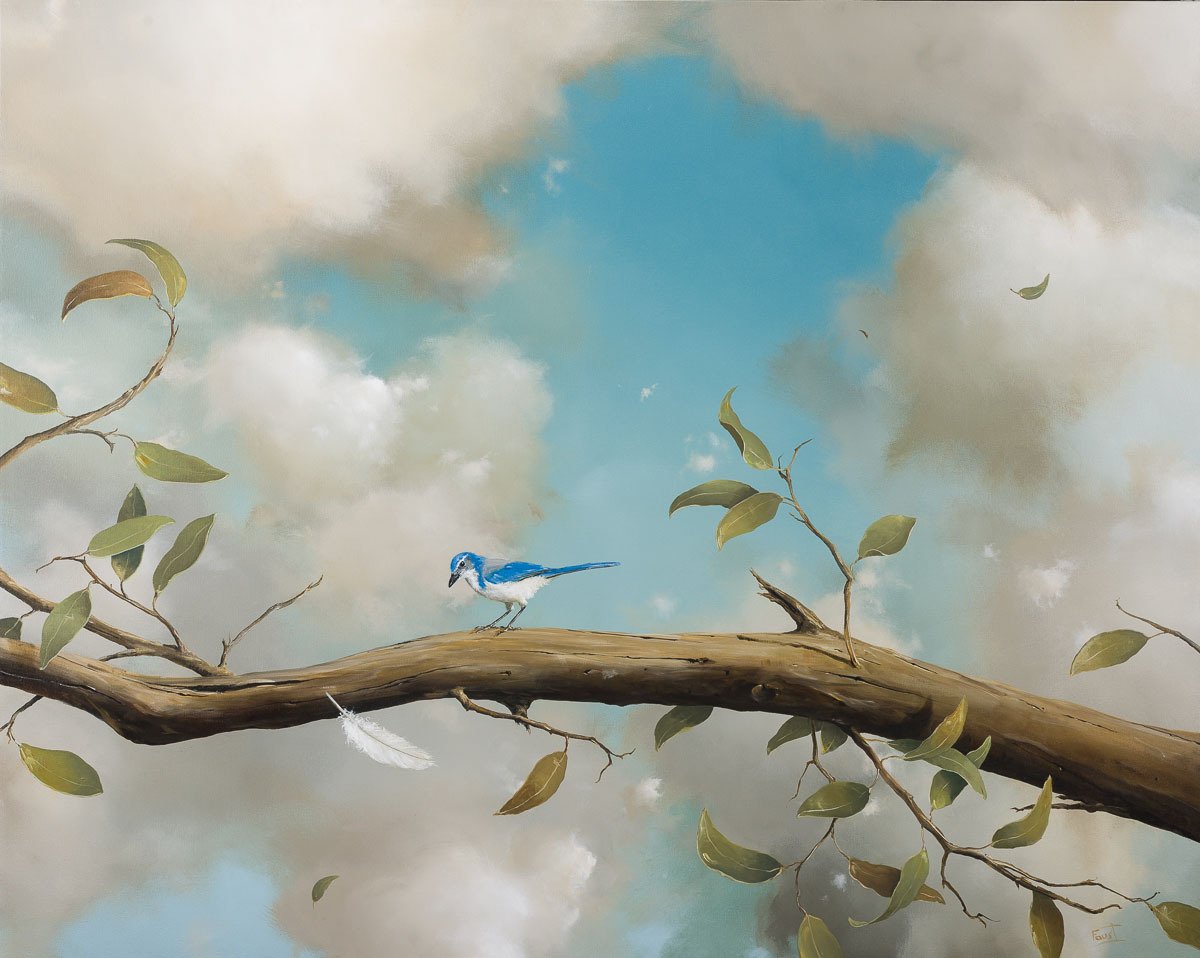 Painter Jeff Faust’s compositions bridge a variety of styles and forms of what he calls “subtle surrealism.” The self-taught artist conjures the more lustrous qualities out of his oil paint in transporting visions of nature. His imagery, which incorporates motifs of avian life, flora, sea, and sky, upends any sense of realism as his objects seem to defy gravity and exist in unlikely juxtapositions—the result of the artist’s experience and imagination. “I think that I’ve trained my mind, and perhaps not intentionally, to…wander in various ways and be open to using what I see or think,” Faust has said. “A bowl can spark all sorts of ideas, many a painting has been done after picking up a stick.”

Rowboats floating in the sky, drifting leaves, puffy clouds, collections of objects (sometimes including clouds) casting shadows in wall niches, and the mysteriousness of shiny spheres recur in Jeff Faust’s work, which he labels “subtle surrealism.”

“I paint things that I want to see happen but can’t in real life. I find gentle twists on reality comforting,” he says. “I have been painting since I was in grade school. My work was big, bold, and graphic sometimes. But at an early age, this subtle surrealism approach appeared. I was searching. I never had anyone tell me how to paint, which is the way I wanted it.”

Having grown up in the Southern California city of Claremont, immediately after graduating from high school, Jeff spent three months in England and then ventured around the United States.

“In Portland, Oregon, I saw an ad for a carnival that needed help. I hooked up with a fellow who had a traveling go-kart concession and stayed with him for four years, traveling to state and county fairs and supermarket openings. It is a fascinating life when you are 18,” he says. But he continued his pursuit of art.

“My folks would send my art supplies to me by Greyhound bus,” he recalls.

After returning to Claremont, Jeff met and married Jan. For 20 years, they lived in the Bay Area, but eventually returned to Claremont, where Jeff works from his home studio.

“I am more than comfortable in a room in a house,” he says of his workspace. “I don’t need much. It is vital for me to be working where I live, because I can go into the studio for any length of time. I can see the work before I go to bed and figure out what I would like to do the next day. It’s a standard-size room with canvases, easels, and paint everywhere. I don’t have great northern light, but it is a very good working environment for me.”

On average, he spends seven or eight hours a day in his studio, with classical music or the local NPR station on low in the background.

“I have achieved a good balance for painting long stretches of time and then backing off. Sometimes I just sit in my studio and look,” Jeff says, noting that he regularly works on two or even three pieces simultaneously.

“Oftentimes, a painting needs to rest,” he explains. “I can work on it full bore. And if I step away from it for a couple of days, I approach it absolutely refreshed. It is very easy for me to move from one visual to another.”

Jeff’s art education came from looking through and reading books in his father’s “art library.”

“I became really excited by a lot of artists that would seem natural, like Dali and Magritte. Miró was an amazing influence on me, but my work is nothing like his. I was just taken by the explosive vibrancy of his work. He opened so many visual doors for me and let me think freely. Renaissance paintings astounded me, and they do to this day. I didn’t zero in on that style, but it all added so much to the way I could think about things.

“It doesn’t take much to spark an idea,” Jeff continues. “I have always been a walker and generally try to get in a couple of walks a day. I can pick up a twig or leaf and get ideas for paintings. I feel pity I don’t have another 17 lifetimes to do some of the pieces I would like to do.”

Though he typically begins a painting with an idea, 90 percent of the time, he doesn’t know what it will look like when it is finished.

“There is a lot of changing my mind as I paint,” he says. “Often, I just start putting paint on the canvas and it will take me somewhere.”

Among recurring elements are bird’s nests, sometimes in precarious placement — a combination that represents both security and the fragility of life.

When Jeff and Jan lived in the Bayfront town of Sausalito, boats entered into his catalog of items that he likes “to assemble.” But his approach places them aloft, above the waves, and sometimes with sails made of feathers.

“I love what it can mean for a lot of people,” he says of the visual that can be interpreted in endless ways.

In another twist on an ocean scene, his painting titled The Traveler shows an urn-potted tree in the water, land in sight, as though it was searching for promising ground.

“It is a wonderful concept to me that a tree has been roaming the globe at sea,” Jeff says. “Even though I am not that interested in poems, I like to think of my work as poetic.” 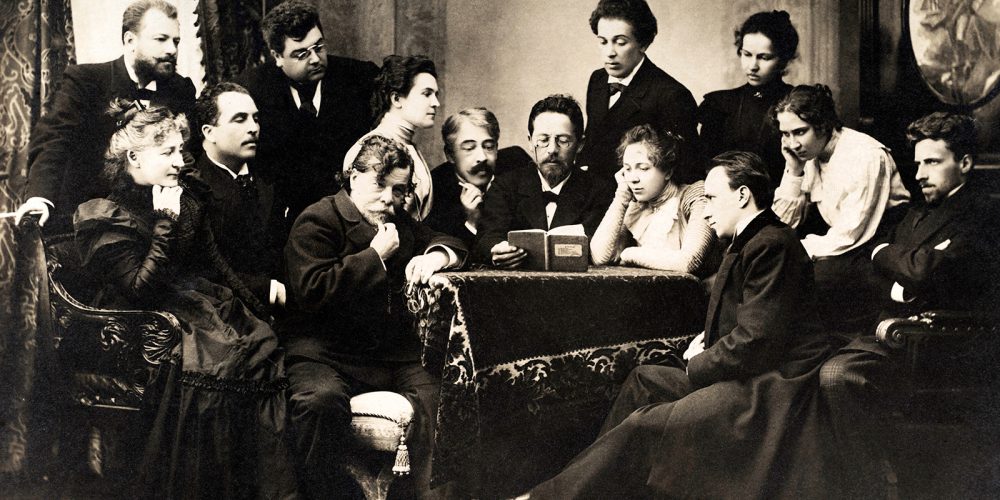 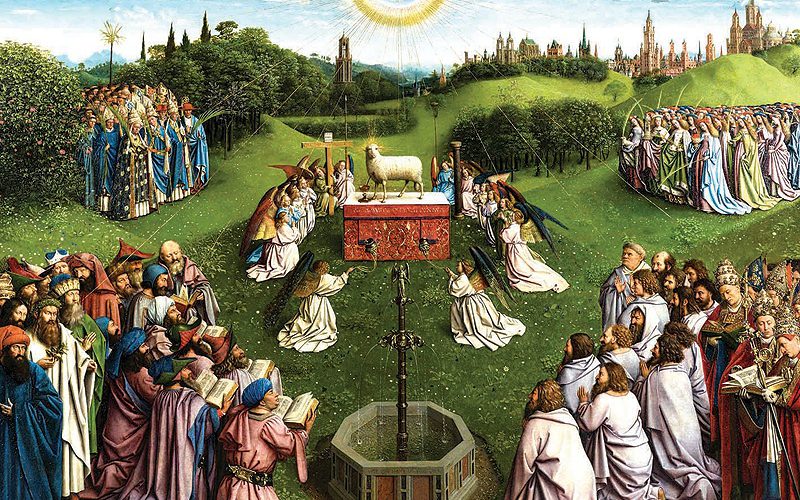